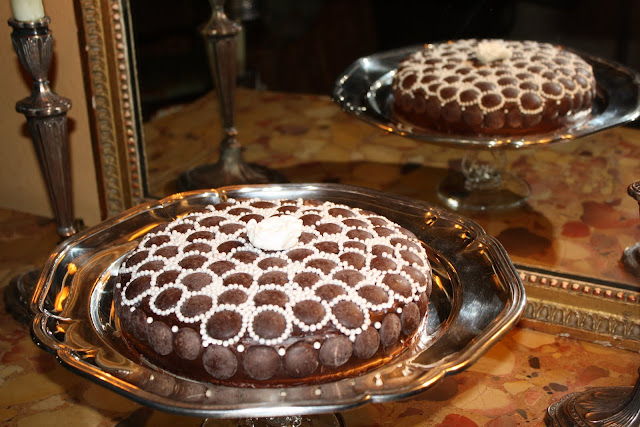 This cake was among those that I have found the least difficult; at least in the recipe itself. Easy mis en place:
My problems continue to be getting my oven titrated. Next time I have decided to bake at 360’ by the oven indicator since my thermometer reads about 15’ low. Today, the cake at 35’ was reading l86’ and then came a battery of temp checks, leaving the poor thing looking like an archer’s target. Finally about 40+ minutes I took it out at 196’. It looked fine.

The ganache was no problem except that a bunch of  hot milk made it into the processor’s lid. Note to self, get a funnel for ganache. I know, I should use the microwave – maybe I will. In that case, at least the spout on the cup will help. Oh, and I used Kahlua in the ganache - lovely.
Next cocoa, Green&Black's [Yay], egg, banana, sour cream mixture in processor. Then mix with dry for batter.

I really cannot complain about the assembly of this cake.

At least we didn’t have to be leery about folding flour into egg foam, a practice for the genoise that I still approach with a jaundiced eye. Btw: Does anyone have the same problem I have in losing a lot of flour out of the bowl when the mixer starts on low? I have tried plastic and tea towels, but there must be something better. I threw away that plastic shield thing that came with the KA  machine. I also have a terrible time adding sifted flour into the batter while the machine is running. I am feeling quite obtuse.

The batter in its pan, and remembered strips.
In the oven. When will it be done - who knows?

This is the cooling cake that was shot by archers manned with Thermopens.

The flat frosting of the cake with ganache.
The cake is very chocolate-y . . . why not, with a pound of chocolate at various places in it. The banana flavor didn’t come through for me, but it, combined with the sour cream undoubtedly contributed to the moist and light texture cake. I found the cake to be excellent, if overloaded with the chunky bits of chocolate wafers in bites. I saved mine for later. My slice of cake pictured here shows chocolate looking flecks – I don’t know what that is, but it sure didn’t impair the quality.
My husband had gotten Eguittard 72% chocolate wafers instead of the chips. I wondered what I might do since they are larger, and I was not too inspired to create the studded effect in RHC anyway. I took a cake pan and turned it upside down. I laid out some of the wafers, wondering what would be fun.

As I laid out the wafers, I suddenly, I remembered a jar of Williams Sonoma Pearls that was on the shelf unopened. Hmm, I thought, things were shaping up.
Why not do that kind of design? Well, later into this endeavor, I almost said, “What for do that design?”. Actually, 'what for' is definitely more accurate – I had no occasion, or any special reason, to become involved in such an intricate, time-consuming décor. The fact that I have done a lot of petit point comes to mind. But, in the early afternoon when I was well into it, a friend stopped by. He came upon me working, and said, “Oh, that is precious!” --- And I thought, “Precious.” And then I knew this cake was for my daughter, who is so precious to me. The white blur on top is white rose I made. I need some lessons from our Food Photographer, Butteryum!

At this moment, my daughter, Stephanie, is in San Diego, and I in Texas. She has no inkling that a cake, of all things, is being dedicated to her. I think she has a fun surprise tomorrow! I just wish she could share it. 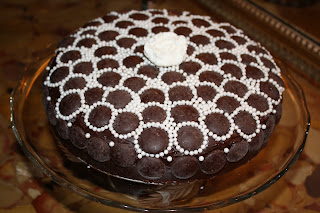 I must admit: I made the cake and the ganache on Saturday, and this decoration alone took ten hours on Sunday, an hour out for tacos. Each pearl was put on with tweezers, many dipped in water to cause the sugar of the pearl to adhere. I didn't include this info until after my daughter read the blog since I didn't want her to think I had gone off my rocker. I doubt if I would ever do it again, but if I did, I would require surgical tweezers, and major work on my mind.
Posted by Alpha Baker Joan at 11:59 PM

Alpha Baker Joan
My education in Jungian psychological training at the C.G. Jung Institut in Zurich, Switzerland, finishing with dissertation and doctorate at Pacifica Graduate Institute, has led me to work in concert with San Antonio's Child Protective Services' cases for fourteen years to protect children, and keep them out of harm's way, with children's safety as the primary goal.